The dates for this event have already occurred, please check back again for new dates.

A Virtual Celebration of Local LGBTQ+ Communities Across North America 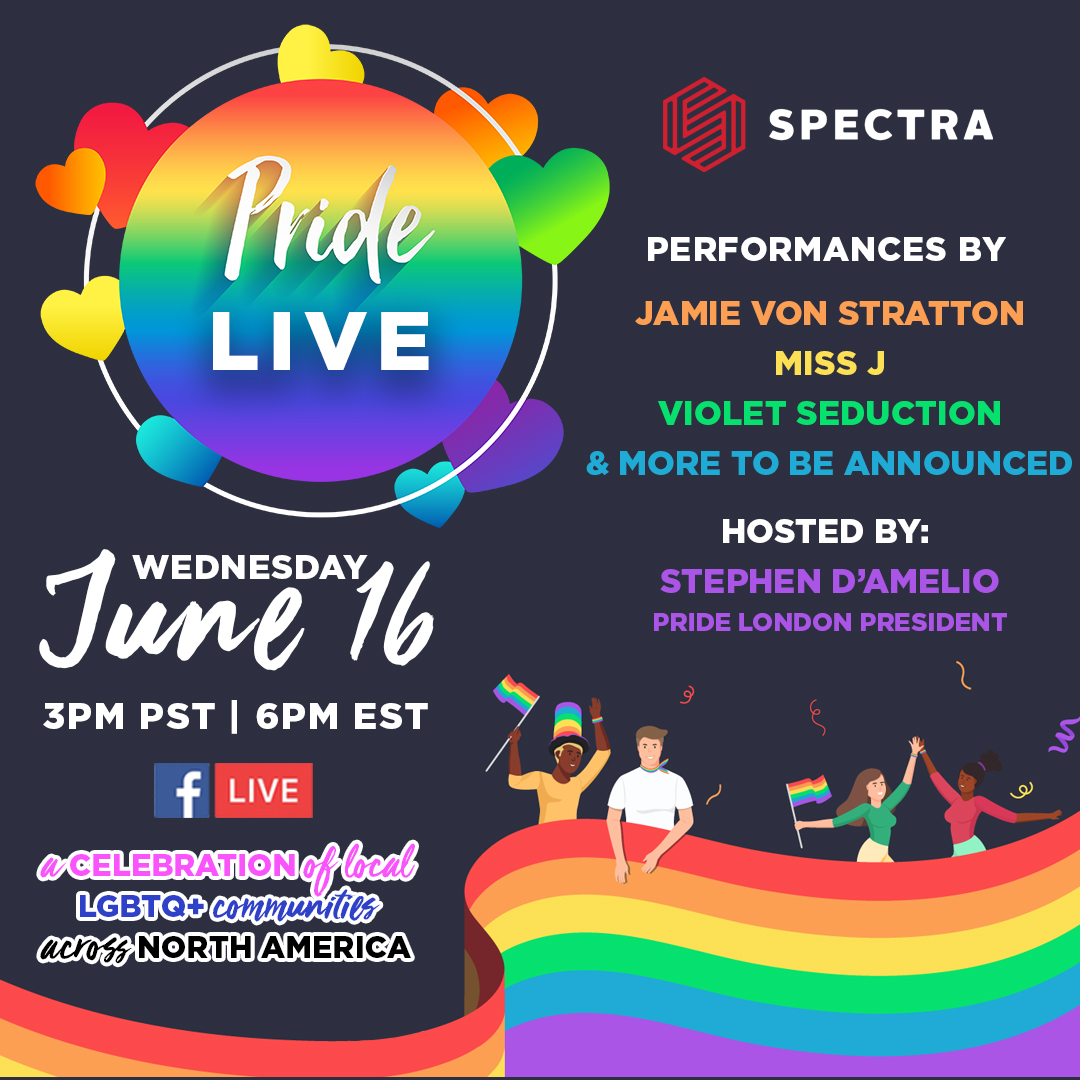 Are you rainbow ready? Spectra venues all over North America are hosting Pride Live, a 1-hour live stream to celebrate Pride Month and highlight amazing local LGBTQ+ artists from communities across Canada and the US.

The event will take place on Wednesday, June 16th at 3:00 pm PST on the Abbotsford Centre Facebook Page. The event will boast an impressive lineup showcasing various forms of art and entertainment. Performances will include drag artists, musicians, a fashion designer, and will be hosted by Stephen D’Amelio, President of Pride London.

June is Pride Month when the world's LGBTQ+ communities come together and celebrate the freedom to be themselves. Pride gatherings are rooted in the history of minority groups who have struggled for decades to overcome prejudice and be accepted for who they are. The original organizers chose this month to pay homage to the Stonewall uprising in June 1969 in New York City, which helped spark the modern gay rights movement. Most Pride events take place each year in June, although some cities hold their celebrations at other times of the year.

Stephen D'Amelio, 36 is Pride London Festival's first black president. An active and award-winning DJ, former radio show host and a committee member for the TVDSB Equity & Inclusion Advisory Committee, Stephen has remained active and engaged in the LGBTQSIA community for over 20 years. Check out all things Pride London @ pridelondon.ca and watch with pride @ pridelonodonnetwork.com.

Violet Seductions is a product of Oshawa, Canada! At the young age of 17, as part of a youth group run by the local LGBTQ+ club that year, Violet was born. Although at first, she was just Violet, but it wasn’t long before she became everyone's sexuality. With over 8 years in the industry, she has performed in 16 cities across Southern Ontario, slaying stages as she goes. Serving you dance, hair flips and a bit of sass; This is Violet Seductions

Miss J is a powerhouse performer, who always leaves her audiences jaws on the floor & asking for more.  A petite firecracker full of energy, she has been performing all over Ontario for the past 7 years. She got her debut show at a queer club in Oshawa, Ontario called Club 717, and has been dazzling the stages ever since! Miss J loves being the center of attention & will always dance the house down!  You want the fire, she’ll light the way, Here comes Miss J!

J. Von Stratton is Jamie Von Stratton. A designer, a performer, an innovator, a delightful nerd. Is Von Stratton her real last name?  Kind of. Von is her middle name. Given to her by her mother to honor the most fabulous Diane Von Fürstenberg. Her creative nature, love of fashion, thrift store finds, and vintage construction led to start her own label in 2003. She started with two shops in Seattle, where she remade pieces she found in thrifts stores, or whipped up one of a kind creations. When she discovered burlesque, this broadened her creative circle, and she began fashioning costumes. It's now been over 15 years and her love of all things stage, fashion, and vintage has allowed her to pour these inspirations into quaint seasonal collections.

Cory Stewart (AWAL/Kobalt) has been described as a synth-pop artist with "smooth voice" (Billboard, 2020) that creates “fearless, unapologetic and relentlessly catchy” music (Canadian Beats, 2018). Cory has been a supporting act for several legendary artists including Boy George and Crystal Waters. Stewart’s debut album 'TOV' was released in January 2021, hitting #9 on the iTunes Pop Charts and receiving overwhelming praise from critics.

Born in Malaysia, Nicole Tan initially moved to Canada to pursue her musical endeavours in classical piano and voice in 2009. Upon completing her Masters in Vocal Performance at Western University in 2015, she found herself unexpectedly gravitating toward jazz and bossa nova. You can now catch her as a music coach, a local real estate agent; and most importantly, as the lead singer of her jazz band, the Nicole Tan Combo, around town! Nicole is the grateful recipient of the 2018 Jack Richardson London Music Awards (Classical Vocal Solo). Ever since the pandemic hit, she has started posting regular vocal videos on her YouTube channel.

Rick has been working as an independent music & theatre professional in various capacities since proudly graduating with his BFA from the University of Windsor’s, School of Dramatic Art. Rick received his Master’s degree from UWO's, Don Wright Faculty of Music in Literature & Performance. He is the recipient of the 2019 Forest City London Music Award for Jazz Solo Jazz Performer! Rick is the Artistic Director of LINK theatre which tours around the province of Ontario.

Nevin Campbell - Nevin is a jazz pianist from London, Ontario. He is a graduate from the prestigious jazz performance program at Humber College and has studied with some of Canada’s top jazz pianists. You can see Nevin perform regularly at Restaurants around the city of London. He plays with many of Southwestern Ontario’s finest musicians and ensembles including The Rick Kish Combo.