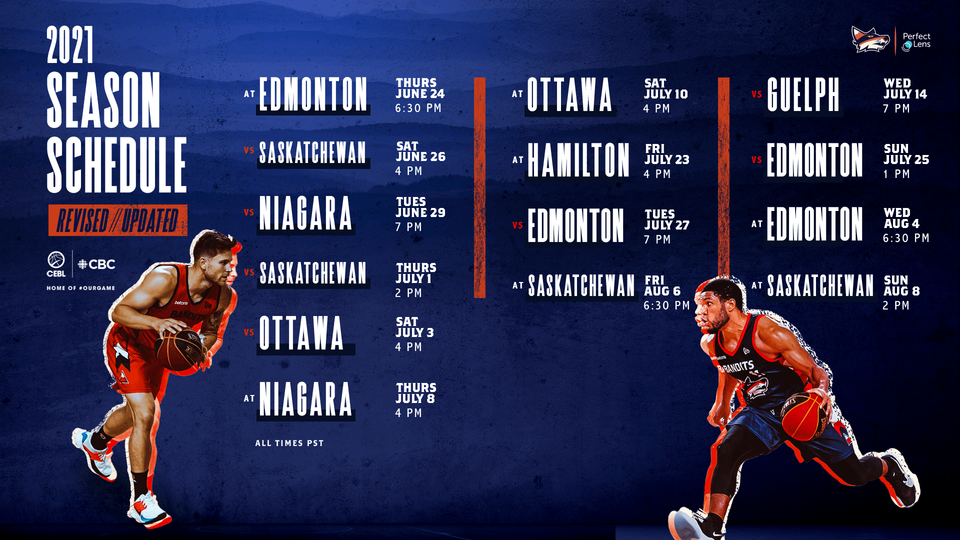 The Canadian Elite Basketball League announced that out of respect for the gravity of the coronavirus situation in many parts of Canada and in order to play a greater role in lifting up the communities in which its teams play, the league will push back the start of its 14-game 2021 regular season from June 5 to June 24.

“When we announced our regular season schedule in February, we explained that we would be reducing our season from 20 to 14 games and pushing the start of the season from mid-May to early-June with the hope that might enable as many fans as possible to attend games in person,” said Mike Morreale, commissioner and chief executive officer of the CEBL. “Getting our players onto the basketball court and accommodating our fans in a safe manner continues to be our priority. Out of respect for the gravity of the mounting challenges that people, businesses, government and medical leaders, and most importantly frontline workers are experiencing in many of our teams’ markets, we now also feel it would be tone-deaf to not delay the start of our season as late as we can while still respecting the integrity of a season in which we plan to play in each of our seven team markets.
“Sports teams make a unique impact on their communities, and CEBL clubs will play an important role in rejuvenating their local markets this summer. To better fill that role and maximize the impact of our return to play we can start the season three weeks later and move some June games into July through a more compact schedule,” Morreale added. “Our staffs in the league office and at the team level have been working toward this season since last August, and the people across Canada who earn income from our teams or from the arenas in which we play rely on us to make every effort to play in our local markets this season. Unfortunately, we cannot push back the end of our season because our players also compete professionally in other top international leagues or the NBA G League beginning at the end of August.”
The CEBL has been working with government and health officials in Alberta, British Columbia, Saskatchewan, and Ontario where its seven teams are based on return to play protocols. The CEBL was the first professional sports league in Canada to return to play after Covid-19 shut down the sports world in March 2020 when it hosted its single-site 2020 CEBL Summer Series. All seven teams convened in St. Catharines, Ont., for 15 days of competition that was Covid-free, with all 200 players, coaches, officials and staff testing negative before and during the event. The games were delivered to more than 130 million viewers around the world.
A league created by Canadians for Canadians, the CEBL has the highest percentage of Canadian players of any professional league in the country, with 80 percent of its 2020 rosters being Canadians. Players come from the NBA G League, top international leagues, the Canadian National team program, and top NCAA and U SPORTS programs. It uses FIBA (International Basketball Federation) rules, and player and referee standards set by its partner, Canada Basketball. The CEBL became the first professional basketball league in the world to use the Elam Ending in FIBA competition when it incorporated the innovative conclusion into all of its games during the 2020 CEBL Summer Series.
More information about the Bandits is available at thebandits.ca, as well as on Instagram (@fvbandits.cebl), Twitter (@FV_Bandits), Facebook (@fvbandits.cebl), TikTok, and YouTube.
33800 King Rd Abbotsford, BC V2S 8H8
604-743-5000 info@abbotsfordcentre.ca