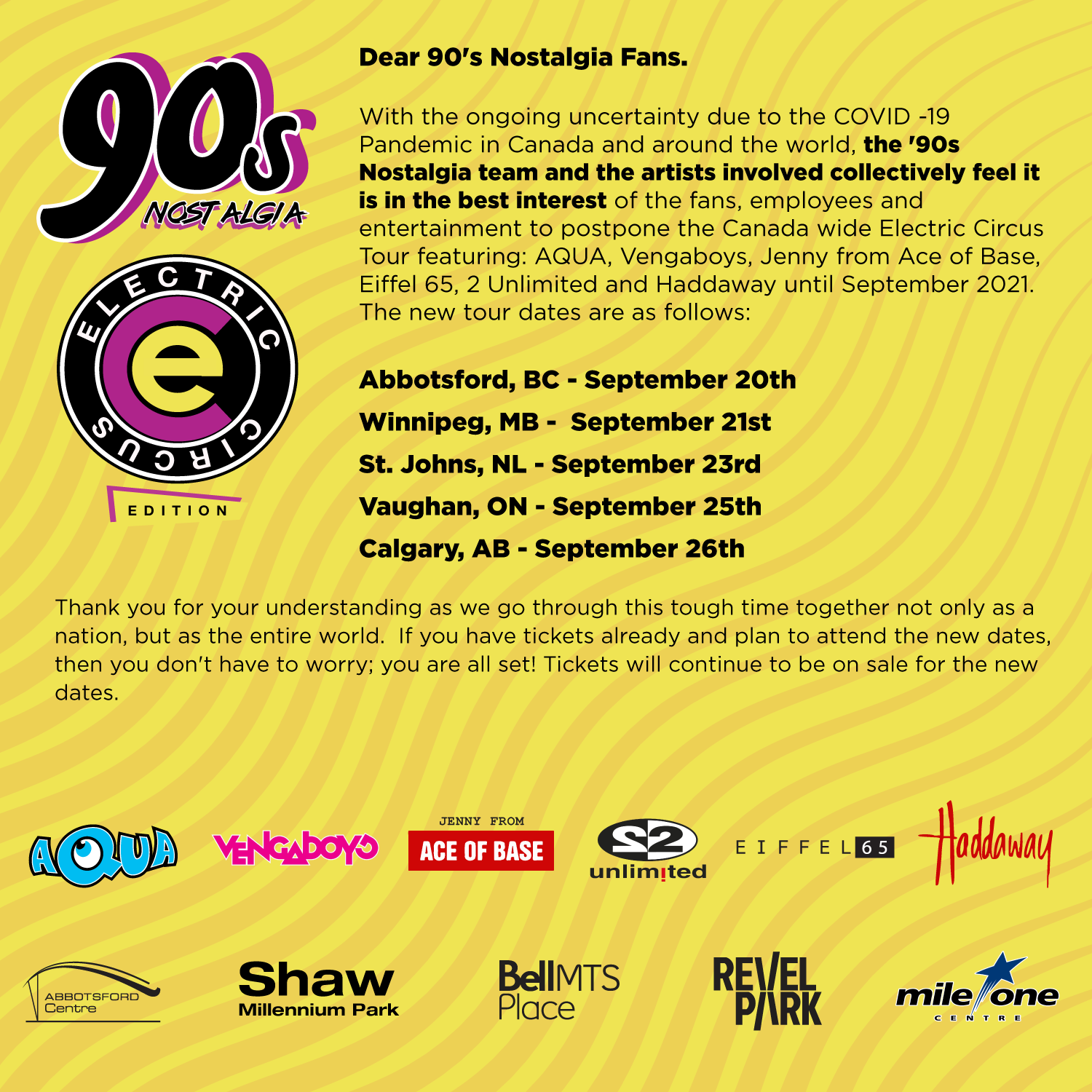 It’s hard to believe that we said goodbye to the 1990s nearly 20 years ago.  Arguably one of the best decades for the worldwide music scene, the 90’s still holding a special place in the hearts of Canadians from coast to coast. Hoping to relive the music of everyone’s favourite decade, 90’s Nostalgia is bringing their Electric Circus edition tour to Canada this September with a stop at the Abbotsford Centre on September 20, 2021.

Popular 90’s bands AQUA, Vengaboys, Eiffel 65, 2 Unlimited, Haddaway and Jenny from Ace of Base will visit major Canadian cities on this once-in-a-lifetime tour.

The 90’s Nostalgia Electric Circus Edition Tour artists have sold more than 2.5 million combined albums in Canada, 13 number one hits on the Canadian Dance Charts, including four number-one singles on the RPM Billboards in Canada.

Electric Circus’s longest-running and original hostess, Monika Deol will be emceeing the tour and there may be a few familiar faces dancing (hello mesh shirt guy!).

This ‘bubblegum pop’ trio stormed onto the Canadian music scene and dominated the Canadian charts selling more than one million albums. Aqua appeared on EC in 1997 and performed their hits Barbie Girl and Candyman live on set.

Jenny from Ace of Base

Ace of Base is a Swedish band that had three number one hits on the Canadian Billboard charts. Lead singer Jenny sings all the hits that made this band the third most successful Swedish band of all time after ABBA and Roxette.

Best known for: All She Wants, The Sign, Don’t Turn Around, It’s a Beautiful Life

The Vengaboys are the ultimate party band! With their high-energy, this pop quartet gets the crowd moving with their chart toppers and catchy beats. The Vengaboys performed live on EC in 1999.

Best known for:  We Like to Party (The Venga Bus), Boom Boom Boom

For the first time in more than 15 years, Eiffel 65 will be performing in Canada! This Certified Platinum band, best known for their song Blue (da be de) will be bringing their Euro-dance sound to the stage this summer. Eiffel 65 rocked the Electric Circus crowd in 1999.

Its been a long time since this iconic 90’s band has performed in Canada. They have sold 18 million records worldwide and more recently their music is played at sporting events across North America.

Best known for: No Limit, Get Ready for This, Twilight Zone

Immortalized in North America by the Saturday Night Live Sketch ‘Night at the Roxbury,’ Haddaway brings his club anthem ‘What is Love’ to the tour as a fan favourite.

Best known for: What is Love